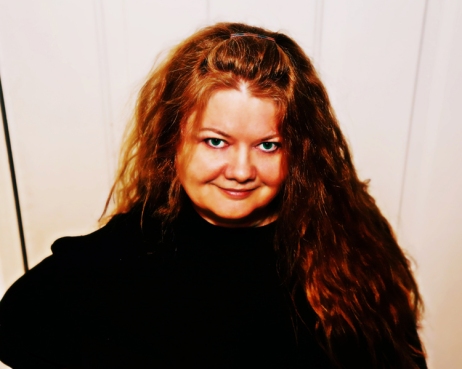 Rachel Carrera has always been a story-weaver, and she’s been writing short stories for as long for as she can remember.  But she never had a desire to turn her tales into books until mid-2013 when she dreamed her first novel The Prison three nights in a row.

Each night, she dreamed more and more details of the same plot.  When she woke after the first night, she thought Wow, what a cool movie, but then she realized it wasn’t a movie she’d ever seen.  After the second dream, she was impressed by the magnitude of details that returned.  Following the third dream, she knew Divine Intervention was tapping her on the shoulder, telling her to write.

While my above “Official Biography” is true, there are other facets to me than just “reads and writes books.”  I’m a mom to a beautiful daughter, Stefani, and a handsome son, Jeremy.

I currently live in Central Florida.  I was born and raised here, but in addition to other areas of Florida, I lived in New York for a while, and I’ve spent a great deal of time in Canada as well as Pennsylvania.

I was a litigation and trial paralegal for fourteen years, and I managed three different law firms during that time.  When I decided to get out of law, I trained and then opened my own wedding photography studio with my sister, Michelle, (who’s also my best friend and who also lives with me).  I did professional photography full-time for seven years until the industry took a nosedive.

I then became the Director of Marketing at a law firm, which allowed me to utilize my writing skills as well as my photography and Photoshop abilities.  When my Lupus took a turn for the worse, I reduced my hours and began working from home  as the firm’s On-Line Marketing Strategist.  It’s still the perfect job to exercise all my creative talents.

Life with Autism and Lupus

I have Asperger’s Syndrome which is a high-functioning form of Autism.  On most days, this doesn’t really bother me. As a matter of fact, both of my kids are also “on the Spectrum.”  Some days are more challenging than others, but we’ve all learned that we are who we are despite having Asperger’s, not because of it. (If you want to know more about living with Autism, I frequently discuss it throughout my blog.)

If there’s a “cool side” to having this neurobiological disorder, I’d have to say it’s that it makes me much more detail-oriented than other people I know.  I believe my son and I are both affected in this way, and because of it, our creativity is heightened.

In late 2016, after a year and a half of baffling numerous doctors, I was diagnosed with Lupus.  I have yet to experience a “cool side” to this diagnosis.  Currently, I’m still learning how to cope and what to do when my body screams at me to stop whatever I’m doing and rest (because I’m not the kind of person who can easily sit still and do nothing). 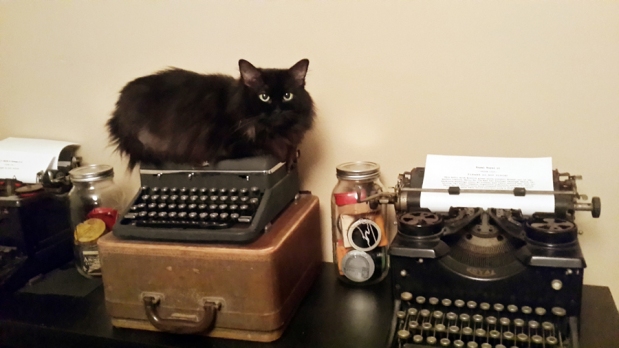 I love, love, love cats!  (Isn’t owning a cat a prerequisite to being a writer?) (Besides all cats, domestic and wild, I have a special fascination with elephants, sea mammals such as dolphins and whales, and most members of the monkey family…  Okay, truly, I adore all animals.)  I have four indoor rescue cats (Cleo, Zsa Zsa, Snow, and Stewie) who often feel compelled to help me write.  I think it’s hilarious when I get in editing mode and run the spell check only to find that I somehow typed “brwwwszl;ksdhjlhkaahjlkkkkkkdd” in the middle of a love scene!  (That almost always means my half-hairless, half-Abyssinian cat Cleo was pacing my desk, demanding treats.)

I have a deep appreciation of vintage “stuff,” particularly vintage décor from the Late 1950s – Early 1960s era.  (I believe it’s because of my affinity for classic TV as mentioned above.)  I also have a really cool vintage typewriter collection that I showcase in my “writer-themed” bedroom.

I love walking, and I like running a lot (though I’m currently trying to build that like into love).  My dream is to someday climb Mount Kilimanjaro (though the Lupus diagnosis may get in the way of this one).

I like learning new things, especially new words, and I frequently play and enjoy board games, especially classic games where you have to use your brain.  Some of my favorites include Hugger Mugger, Mind Trap, and all versions of Trivial Pursuit and Clue.  As far as games of chance, my favorites are Can’t Stop and Yahtzee.

I prefer to avoid negative people and haters.  I have no use for toxic relationships, and I can’t stand drama.  I especially abhor when people discriminate against an entire class of people because of their gender, color, nationality, sexual persuasion, religion, weight, appearance, political party affiliation, or some other reason.  I believe there are good people and bad people of all types.  The ones that are bad are bad because they exercise their free will and choose to be bad.  It has nothing to do with their [fill in the blank].

I feel that green living is important, and while I try to practice it, I’m not as zealous as I wish I were.  The same goes with organic foods and buying local.

In addition to the books listed in my official biography, I also love most of the original Grimm’s Fairy Tales, Lewis Carroll’s Alice’s Adventures in Wonderland and Through the Looking Glass and What Alice Found There.  I also appreciate a lot of Charles Dickens and some Shakespeare, as well as most of C.S. Lewis and Mark Twain.  And I’ve adored Johanna Spyri, Jonathan Swift, Daniel Defoe, and Laura Ingalls Wilder from the time I could read.  Another of my favorite books is The Diary of Anne Frank.  I also generally enjoy reading anything about Medieval times, the Holocaust, and the sinking of The Titanic as well as classic television actors’ autobiographies and memoirs. Additionally, from time to time, I enjoy re-reading the books I read as a kid, such as those by Beverly Cleary and Judy Blume.

Sometimes I’m told that my stories would make great movies.  But when I write, that’s not what’s on my mind.  Personally, if I love a book, I will probably not go see the movie ever, because I’ll probably be disappointed.  However, if I love a movie, I will likely go buy the book.  I think my two exceptions to this are The Karate Kid (the original movie and book are both excellent) and Lord of the Flies.  (The book, the original movie, and the updated movie are all phenomenal.  I can’t say enough good things about them.)

I love when I hear that what I write reminds people of a modern-day version of Alfred Hitchcock Presents or The Twilight Zone.  (I even like to go so far as to say that Rod Serling and Alfred Hitchcock are my muses.)  Even though my writing subject matter may sometimes seem dark or intense, I try to refrain from needless cursing or graphic violence unless it specifically adds to the plot.  I love God and am mindful of that when I write, so in my work, I’ll never use His name in vain for any reason.

314 thoughts on “About the Author”