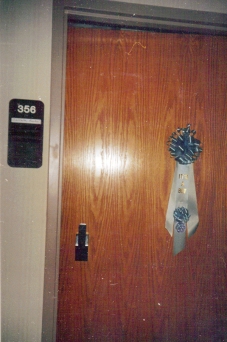 Since today is my son’s birthday, I’ll make today’s theme post about him.  When Jeremy was born, my hospital room number was 356.  At the time, Florida had only recently enlisted “Cash 3” in its lottery games.  I’ve never been one to play the lottery very often, but perhaps about once a year, I play for fun.  However, that day, I told my family we should play 356 on a Cash 3 that night.  (This was odd for me, because I’ve never been one to take the numbers given to me by any particular event, but rather I prefer to select them myself.)  No one listened to me, and of course I was in no position to go out and buy a ticket.  Well, you guessed it…  That was the number that won that night!  It was a $117 payout for a $1 ticket.

In 2003, when Jeremy was nine, we lived in Orlando.  Whenever a space shuttle would launch, if it was during work or school hours, his school would go outside to watch as it took off, and my co-workers and I would stand at the windows and watch.

On January 16, 2003, the Space Shuttle Columbia launched.  At the time, I was watching out my office window, and Jeremy was with his class out on the field.  A short time later, Jeremy’s third grade teacher called me and asked me to come pick him up.  (This was not unusual, because with his Asperger’s Syndrome, he frequently disrupted his class.)  She said that ever since the shuttle took off, Jeremy started telling everyone that would listen that the shuttle was, “Not ever going to come back to earth,” and that several children in his class were quite upset by his repeating this.  At the time, neither his teacher or I (or Jeremy) had watched the news where it was reported that less than two minutes after the shuttle took off, a large piece of it broke off. 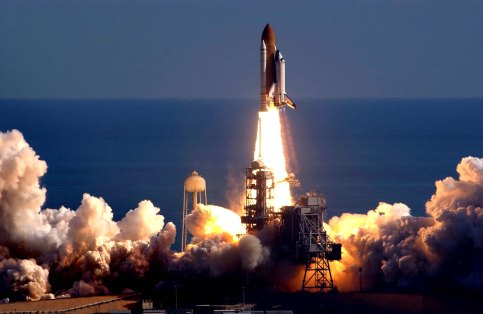 For the next several days, Jeremy was like a broken record as he looked into the sky and emotionlessly said, “That shuttle’s never coming back.”   (With Asperger’s Syndrome, he has little to no empathy and had no clue why he was being offensive or inappropriate.)  He kept saying it so often that his teacher phoned me several more times to try to make him stop.

Well, of course you already know the rest.  On February 1, 2003, the shuttle blew up upon reentry to the atmosphere!  Upon hearing the news, Jeremy simply said, “I knew it,” and he never spoke of it again.

Talk to me:  Do you remember the Space Shuttle Columbia disaster?  What space shuttle event do you remember most, and where were you when it occurred?  If a kid in your third grade class made such a bold prediction, would it have frightened you?

The year was 2006.  The month, July.  My son Jeremy, my sister Michelle, and I packed up a picnic lunch and headed to Cocoa Beach to watch the space shuttle Discovery launch on its journey toward the International Space Station.  The third of July was a hot day like any other.  We clocked it being around 114° F during one point.

The funny story I was going to tell you today was about how we waited forever to see the shuttle launch, and there were no public restrooms anywhere on the crowded causeway.  So we all ended up taking turns in the backseat using the container that had held our potato salad as a urinal!  But when I told my sister that I was going to share that, she vetoed me and insisted that I tell you about what happened the next day instead. 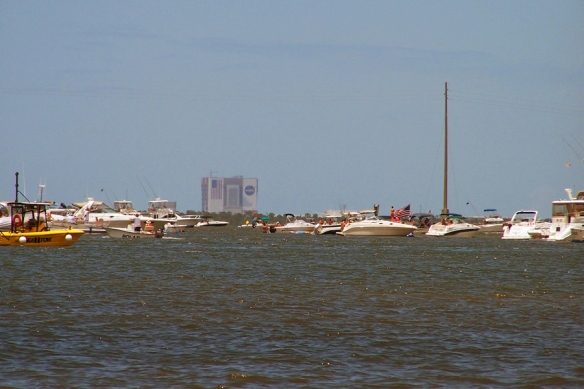 See NASA in the background?

Being professional photographers, of course we had tons of photo equipment, but at that point, it was all still film.  A couple of months prior, we were forced to stop photographing at a Bon Jovi concert because we had “professional cameras,” and only “point and shoots” were allowed.  So we ventured into the digital photography world and purchased our first digital cameras which were also capable of taking video.

The July 3 launch was scrubbed, so we went back the following day.  This would be the first time ever that the United States had an Independence Day launch.  Michelle, being a history major, was especially pleased to be witnessing this bit of history making in the progress. 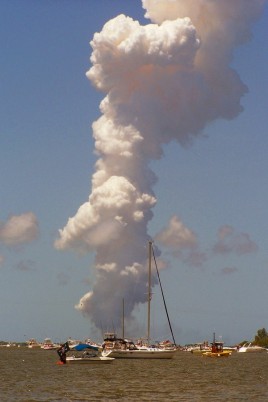 We decided that I would photograph the launch, and Michelle would videotape it using our new digital cameras.  Well, of course, being a professional photographer, she knew that when taking still shots, you can rotate the camera to either take landscape (horizontal) formats or portrait (vertical) formats.  But what she forgot is that with video recording devices (back then anyway before cell phones were capable of recording digital video), you had to hold the camera horizontally because there was no way to rotate the picture and it will be forever viewed sideways! 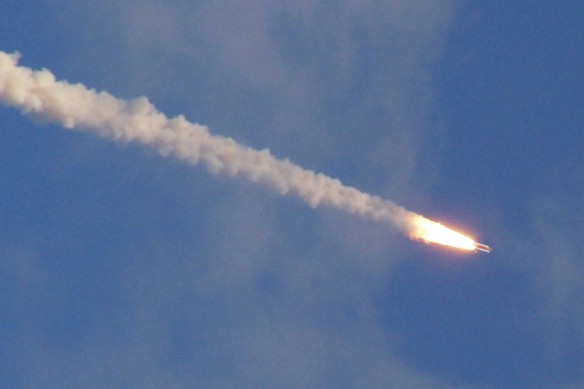 Yikes! It’s heading toward the ground! (No, it’s just a sideways photo to give you an idea of what the video looked like.)

So, sure enough, when we got home, excited about seeing the launch, we put my photos and Michelle’s video on the computer and viewed them.  Sadly, when we realized her video was sideways, it looked as if the astronauts had crashed right into the ground!  YIKES!  So, Australia, if you folks see what looks like a shuttle sticking up out of the ground… it probably is! 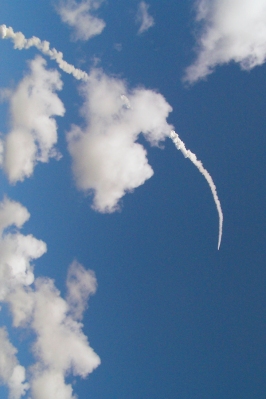 Michelle’s video looked like this… The trail of smoke started from the side and headed down toward the earth! YIKES!

Talk to me:  Have you ever witnessed a shuttle launch?  Have you ever heard the sonic boom it makes when it enters back into the atmosphere?  If cost weren’t a factor, would you ride on a private passenger space shuttle and go into space for a few days? 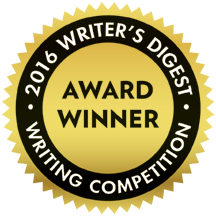 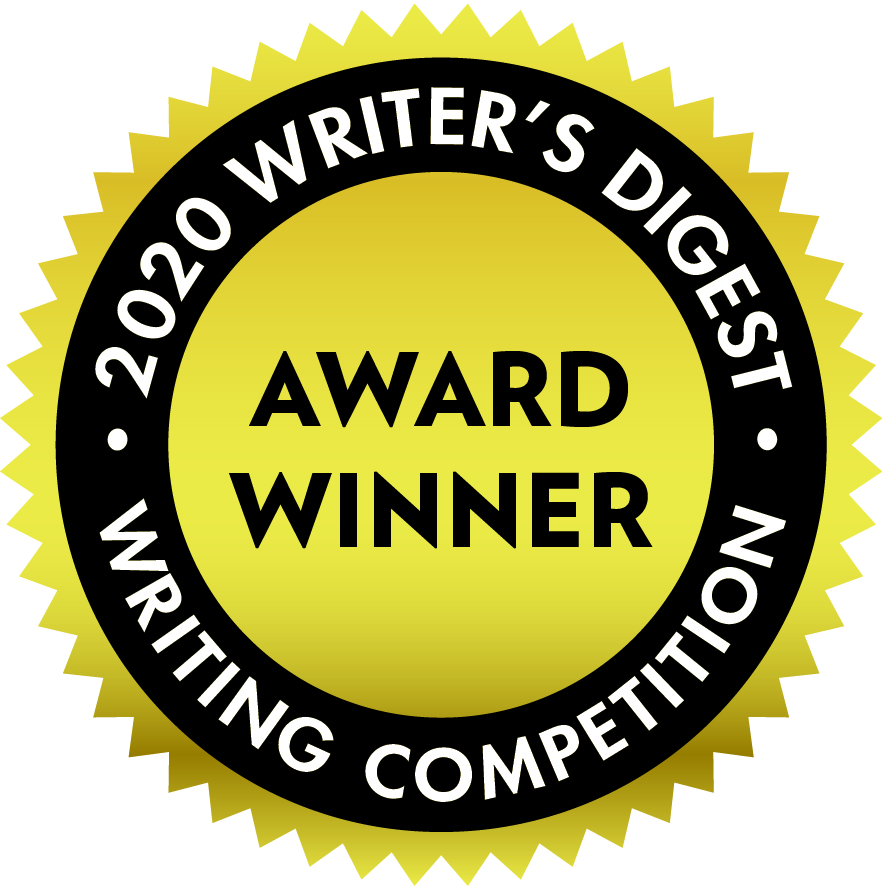 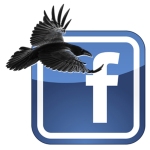 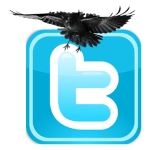