When I was pregnant with Jeremy, just as with my daughter, I had severe hyperemesis, and I was constantly in the hospital getting IV’s for my dehydration and shots for my nausea.  Even water made me puke.  I lost nearly twenty-five pounds during the course of this pregnancy.

I worked as a cake decorator part-time and went to college full-time when I got pregnant, but because of all my nausea, I had to quit the job and rearrange my school schedule.

By the time I was eight months pregnant, I was taking classes only two days a week both mornings and nights. My Tuesday and Thursday night class was Business Communications.  When we started that class, the instructor told us that she’d take a letter grade off if we missed one class.  Furthermore, she said she’d never given an A for that class in as long as she taught it, so we could already only count on a B.  At the time, I was on the Dean’s List and was quite proud of my 4.0 average, so I was already upset that I might lose points just because this teacher was a hard nose.

I had Algebra that Tuesday morning, and during class, I felt a few contractions.  However, I’d experienced so many false alarms when I was pregnant with my daughter four years previously, I didn’t want to go to the hospital and be sent home, not to mention waste my day sitting in a hospital.

By that evening’s class, my labor felt like it was quite intense.  But it was still almost a month until my due date, so I wasn’t sure how to proceed.  I told my friend who was in a different class that I might need her to drive me to the hospital.

As I sat in Business Communications, my mind was not on my work.  Finally the teacher stopped speaking and asked me if I was okay.  I told her I thought I was in labor, and she gasped.  “Well, why are you here?  You should be at the hospital!  Go!”

I said, “I don’t want to be marked down to a C for missing a class.”

She chuckled and told me that childbirth was an acceptable exception to her rule.

I got my friend out of her class, and we left for the hospital.  They admitted me and told me I was in full-blown labor.  My contractions were constant without any downtime in between.  They asked me if I wanted an epidural, and I told them not to bother because it didn’t work when I had my daughter.  They told me the epidurals were improved since then, and advised me to have one since my labor was so intense.

After they put me on the waiting list for the epidural man to come around, I got bumped to the top because I dilated so quickly.  But just like before, the epidural didn’t take, and I felt everything.  Also just like before, I had no desire to push, and there was no way they were going to make me push that huge thing out of me for all the money in the world! Also just like before, the doctor had to break my water again, only this time I knew what to expect.  I knew he’d be coming at me with an eleven foot long needle.  So, when he came at me with a sandpaper hand glove instead, I freaked yet again! 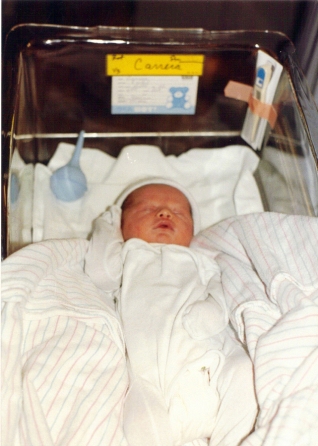 More than half a day since I was dilated and ready, I finally gathered enough courage to push, and Jeremy was born at 11:41 Wednesday morning.  His umbilical cord was wrapped around his neck three times, and his lungs were underdeveloped, yet for being nearly a month early, he still weighed 6 pounds, 14 ounces and was 20¼ inches long!  He was rushed to the neonatal intensive care unit, and I didn’t even get to hold him.

As I predicted, the epidural didn’t take, and I felt the whole thing.  And just like with my daughter, afterward, I stood and walked to the other bed because my legs were not numb.  However, unlike the previous time, about an hour after I was settled back in my room, the telephone rang.  I tried to reach it from bed, but it was on the far side of the table.  So, when I stood to get the phone, I fell flat on the floor!  Yes, about a half hour after my son entered the world, my epidural finally kicked in!  I had fallen and I couldn’t get up!  I was completely paralyzed and dead from the waist down.  So I took the phone call then waited on the floor for another twenty minutes or so until a nurse found me and lifted me back into bed.  I was so embarrassed!  (But it was freakin’ hilarious, so feel free to laugh.  Hard.)  The nurse said she’d never heard of such a thing as the epidural being delayed like that.

The following day, I got released in time to make it to my evening Business Communications class.  My instructor walked in and started lecturing when she looked at me and furrowed her brow.  “Wait a minute!  You’re not pregnant!  What happened?  Why are you here?”

I told her I had the baby the day before and that I was afraid to miss her class because again, I didn’t want to lose a letter grade.

She laughed and again said that childbirth was an exception to that rule and told me to go home.

I never missed another class after that, and I was quite excited at the end of the term when she announced to the class that I was the first student to whom she had ever given an A.

And Jeremy was released from the hospital, though he would end up being a very sickly baby and be back in the hospital numerous more times due to his underdeveloped lungs.

I named Jeremy after the song “Jeremy” by Pearl Jam.

So, in conclusion, I’d like to wish my son Jeremy a happy twenty-first birthday!  Jeremy, I hope you’ll remember to be responsible and stay safe in whatever you do.  And while you might feel like a man who knows everything now, just know that in a few years, you’ll look back on this day and laugh at how little you really knew.  But that’s okay.  It’s all part of the growing process.  I love you, Smoodgie Bear, bigger than the moon.  I hope you have a wonderful day and a blessed year!  Happy Birthday, Sonny Bird!

When my son was a baby, he was quite sick.  He was a preemie, and because his lungs weren’t fully developed, he got RSV when he was only a couple of months old, and I nearly lost him.  After that, he had horrible bouts of asthma and croup, and he was hospitalized frequently.  When he was not in the hospital, I had to give him breathing treatments every two hours, and he had a daily dose of steroids to help prevent further complications.

As a result of all the steroids he took, Jeremy was a huge baby!  He wasn’t fat at all, but he was incredibly tall and a solid wall of muscle.  By the time he was two, he wore a tight size 4, and people often confused him for a much older child.  (In this funny photo where he fell asleep in my grandma’s chair, he’s barely one year old.  Can you see how tall his is, even though he’s folded up quite nicely?)

Anyway, Uncle Charlie took me and my children to an expensive restaurant. At one point, Charlie had to go outside and talk to someone he knew.  However, while he was gone, something disagreed with Stefani, and she started to get sick.  So I had to take both kids and run to the ladies’ room.

As you can imagine, Jeremy, who was about two and a half at the time, looked like he was 6 or 7.  As we approached the ladies’ room, a woman came out and started yelling at me for taking my son into a room meant for women.  Meanwhile, poor Stefani couldn’t contain herself any longer, and she started to vomit right there in the corridor.  I tried to push by the nosy woman and get Stefani in the bathroom, but when I did, I lost sight of Jeremy.  I guess the nosy woman left to go complain about me, but the next thing I knew, there was a loud siren going off.

Yes, Jeremy had managed to push open the emergency exit door and run outside!  I had to leave Stefani to run after him, and when I got back, the manager and the nosy lady were there scowling at the lot of us.  Talk about embarrassing!

So tell me: Would you ever stop a young mother from taking her male child into the ladies’ room?  Have you ever pushed an emergency exit when there was not an actual emergency?