While I was dealing with all the health issues I had this year, I was so exhausted at times that it was all I could do to make it to work.  Even reading was too much for me to handle.  Needless to say, I haven’t been as productive as I’d have liked, at least until the past couple of weeks.  However, to try to keep my writing mojo going, and at least stay in the mindset of writing, editing, reading, creating, etc., I redecorated my writing desk area with a writerly theme in mind.  (Actually, I overhauled my entire living room / dining room with the writerly theme, but I’ll save the rest to show you another time.) 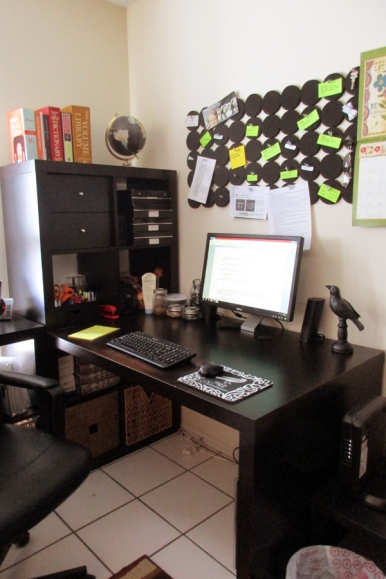 As I’ve shared before, my décor is a late 1950s / early 1960s motif, so I tried to keep that going while adding literary touches.  You’ll note the books on the top shelf include an old school dictionary, thesaurus, and volume library.  (Of course, they also include the “Chicago Manual of Style,” Stephen King’s “On Writing,” and Chuck Sambuchino’s “Guide to Literary Agents.” Though those aren’t vintage, they are good to have around.)

My mouse pad as well as my little statuette features The Raven from my favorite guy, Edgar Allan Poe. 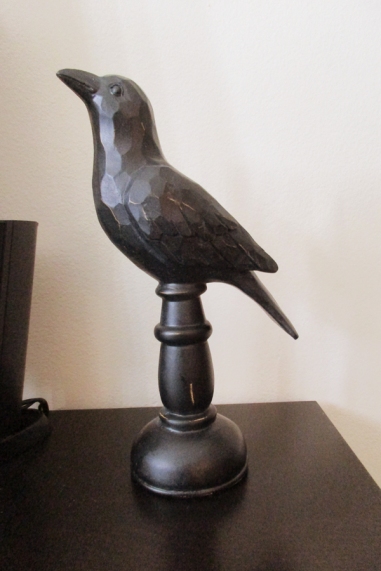 My printer is just the best investment ever!  I’ve definitely made use of printing my manuscripts in a different font than I type in then editing the hard copy.  It makes a huge difference seeing your work on paper as opposed to digitally.   This model is reasonably priced on Amazon (more reasonable than I’d have ever imagined), and the laser cartridges are under $30 which is less than I used to pay for ink in my old inkjet!  Better yet, a single cartridge prints around ten reams of paper with no quality problems whatsoever. 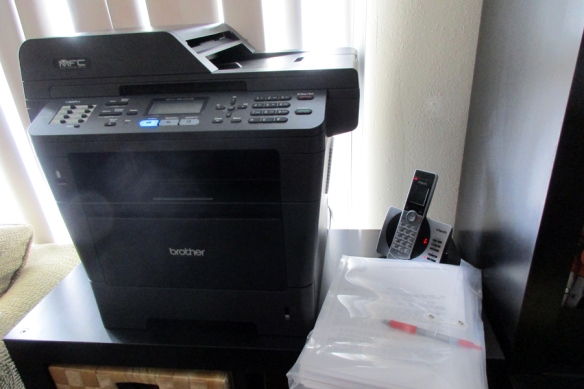 I found these cool plastic envelopes at The Container Store to hold the manuscripts I print while I’m editing them.  (They’re great for carrying them back and forth to work to peruse during my lunch hour.) 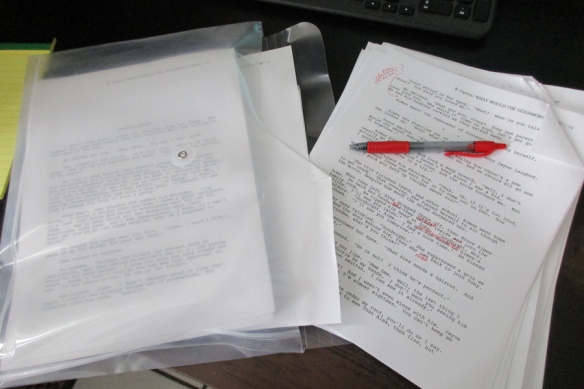 And finally, my awesome sister Michelle got me a subscription to Writer’s Digest as well as Poets & Writers.  Both are very cool (though I favor WD by far), and they both have lots of useful information that make them worth keeping after I read them.  (Those actually go in another one of those cool plastic envelopes once I’m done with them.)

Anyway, thanks for visiting me at my house today.  As I’m starting to get my energy back, I hope my creativity will start flowing again and I can think of more interesting things to blog about.

So tell me, what do you have in your writing nook, and what keeps you inspired?

As you know, I’ve had more than my fair share of health issues for the last several months.  I vomited daily for almost a year.  I had a severely infected gallbladder that had to be removed.  I had a calcified gallstone dropped inside me during surgery which caused some horrific aftermath.  I had every test known to man to find the root cause of my digestive issues.  And I had some of the rudest, most unhelpful doctors I’ve ever had the displeasure of treating with in my life.

I’m now happy to report that I finally have some answers.  I was diagnosed with idiopathic gastroparesis.  Of course idiopathic means there’s no known cause.  For those of you who don’t know what gastroparesis is, it mostly occurs in people with diabetes, which I do not have.  (Hence, why it’s idiopathic in me.)  Basically, it’s when the vagus nerve is damaged and your digestive system is sort of “paralyzed.”  (It’s actually more complicated than that, but essentially, that’s the short version of what’s going on.)  (Also, although it’s technically idiopathic – or of unknown origin — my personal observance tells me it’s stress induced.  My whole life, I’ve tended to get physically ill when under extreme stress.)

(WARNING: If you have a weak stomach, skip this paragraph.)  So essentially for the past year, when I’d eat, I would not get that queasy, nauseous feeling like when you have a stomach bug.  Rather, the food would sit like a hard lump in my stomach for hours, causing a lot of pain unless I made myself throw it up.  So, since vomiting was the only thing that felt better, I had to make myself puke after most meals.  And it would come back in “layers.”  i.e., if I ate, for example, a grilled cheese sandwich, French fries with ketchup, and chocolate pudding, I’d first throw up the pudding, then the ketchup, then the bread, then the cheese, then the potatoes.  And no matter how long after the meal, the food was always recognizable as whatever I’d eaten, even if it was the next day.

(The weak stomached can continue reading now.)  The doctor who diagnosed me really gave me no advice other than to eat several small meals rather than three big meals, puree my food or eat baby food or have liquid shake meals when possible, and avoid fat and fiber.  However, because I have so many “idiopathic food allergy symptoms” (meaning I have food allergy symptoms even though the blood tests say I’m not technically allergic) likely because food was sitting undigested in my gut for so long, I can’t even have much of a variety in the first place.

So, I was left to research my condition on my own.  Now normally, I’m a believer in Western medicine.  But there was no known Western help for me that I could find in my research.  However, what I did find was in the Eastern medicine world.  Basically, I deduced that I have a condition only known in the Eastern medicine world known as hypochlorhydria, which means that my body doesn’t produce (enough if any) stomach acid.  (Quite coincidentally, the symptoms for too little stomach acid are almost identical to those of too much stomach acid.)  Having little to no stomach acid means that my food can’t digest, and therefore, it literally sits in my gut until it rots or until I vomit.  (I still have no idea if the hypochlorhydria caused the gastroparesis or the other way around, but there’s definitely a connection, at least in me.)

So the Eastern “cure” for this condition is this magic pill called Betaine Hydrochloride with Pepsin, which is basically artificial stomach acid coupled with a digestive enzyme (the Pepsin).  A person should start off taking one with each meal.  If, after the meal, your gut burns like hell, then you don’t have that condition, and you should not take any more pills.  But in my case, I was to then work up to increasing the pills by one per meal each week until I’m digesting well.  I’m now up to eight pills per meal.  But even though that’s a lot of pills (and I HATE swallowing pills!), I’m so happy to not be hugging the toilet every night.  I still have to puke roughly two or three times a month, but being as I was at that much per day, I’m not complaining in the least.  (And the few times a month this has happened lately, it’s been when I’ve been at the end of my rope with stress.)  Because I’m at least for the most part able to eat and digest food again, my B12 and iron deficiency anemia has gone away, my color is back, my hair isn’t falling out like it was, my vision has improved, and I’m not nearly as tired as I was.  I still don’t feel one hundred percent yet, and there are still a ton of foods I still have to avoid or else I swell, but I feel incredible compared to how I felt earlier this year when I was at death’s door.

I also want to thank you all for all your sweet emails to me checking on me and for your prayers, kind thoughts, and warm wishes.  Your concern means so much to me.  I love and miss you guys, my blogging family, and I hope to be able to return to blogging regularly soon!

So, that’s what’s been going on with me… Now tell me, what’s new with YOU?