I normally don’t eat fast food.  Not because I’m uppity or anything like that, but because I have so many food allergies/intolerances, that it’s a waste of money if I just puke it up after I eat it anyway.  Anyhow, a few weeks ago while I was dealing with the grind of work, I had absolutely no energy, and I decided to stop for breakfast on my way to the office.

That morning, I had to drop my car at the shop for a repair, so I rode through the Burger King drive-thru and ordered an egg and cheese croissant minus the bacon, dropped off my car, then had someone drop me off at work.

Since I was extra early and the first one there, I decided to eat in the breakroom, so I poured a big glass of milk, got some napkins and salt, and sat down to the table.  As I opened the bag, something smelled funny… kind of smoky.  I suspected they forgot to make my sandwich without bacon, and I was a little irritated that I’d have to pull it off myself and lose all the cheese that would’ve inadvertently melted to it.  Grrr!

Anyway, I unwrapped the sandwich, opened the top, and saw there was no bacon.  Good.  I picked it up to take a bite, and that same smoky flavor overpowered me.  Oops!  I don’t know what that smell is but I forgot my salt.  Frustrated, I set the sandwich back down, opened the top bun and salted it, then picked it up again to eat.  But before I could take a bite, my phone rang.  Dang!

After hanging up from my call, I picked the sandwich up a third time when I realized that I’d left my milk on the counter.  I irritably threw the sandwich down, fetched my glass of milk, then returned to the table only to discover this: 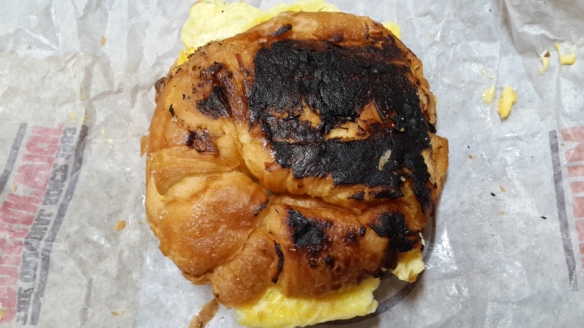 GROSS!  Have you ever seen anything so disgusting from a so-called restaurant?  (Okay, I actually have, but that’s another story.)

Obviously, I didn’t eat that nasty thing, but I at least thought to photograph it before I tossed it.  I was so angry!  I was hungry, I lost my food and my money, and I didn’t even have my car to go tell Burger King what I thought of them.

Later that evening, I actually did go back to the restaurant and show them that photo, but they refused to refund my money!  They said they could only issue a breakfast refund at breakfast time, so if I really wanted my money back, I could come back the following morning.   I said, “Screw it,” and I stormed out and never went back.  And I probably never will.  [So, Burger, King, I hope your employees’ ineptitude at assembling a simple sandwich and refunding a couple of bucks for your obvious gaffe was really worth  all the business besides mine that you could stand to lose in this day and age of social media and a camera at our fingertips.  #BurgerKingSucks]

Let’s talk: What’s the worst thing you’ve ever gotten at a fast food restaurant?  Did you photograph it at the time?  Did you get a refund?