Last week, a friend of mine walked outside and found an alligator in his pool.  (No, not the one in the photo.  His was much smaller – only about three and a half feet long.)  Until a couple of days ago, we haven’t had much rain here, and it’s been over 95°F every day (with the humidity making it feel more like 105°-110°), so the ponds and lakes were low at the time, too. 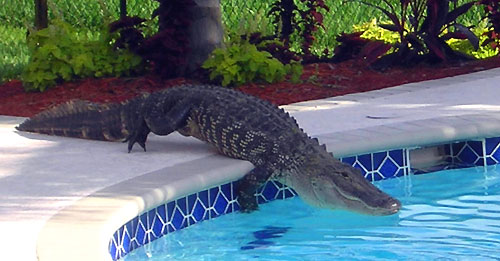 A lot of people from other parts of the country think when they hear about this, it’s a freaky occurrence, but it’s actually a lot more common than you think.  Believe it or not, alligators are actually pretty delicate creatures in that they have to take an active role in self-regulating their body temperature to stay between 82° and 92° F, or they may perish.  Because it gets so hot here, that’s the reason many alligators are nocturnal during the summer months.  When the lakes and ponds start to dry up, they need water to cool off, and they head for pools.

For today’s Throwback Thursday, I bet you already guessed that my story involves an alligator.  When I was a kid, my Uncle David would sometimes drive down with his wife and kids then pick up my Grandma and me to go spend a few days at his house in Northern Florida.  It was always such fun when this happened because I got to play with my cousins who were like siblings to me, and we’d get to ride in the back of the truck with the camper top and wave to the people behind us. Plus, it was private back there away from the grownups who seemed to always want to tell us to be quiet. 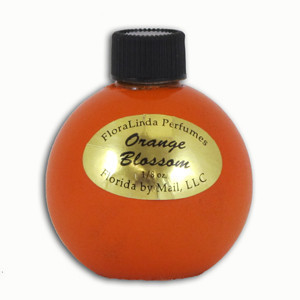 Every time we made that three and a half hour drive, we’d make exactly one pit stop at the Florida souvenir shop along the way.  This was always the most fun, not only because we got to get out of the extremely hot back of the truck, but because Uncle David would spend a whopping 99¢ on each of us when we went inside.  While the souvenir shop had tons of junk we all wanted, he stood firm and always bought us the same thing every single time:  David Jr. got a rubber alligator, and Kathy, Jennifer, and I all got orange blossom perfume that came in a glass orange.  And while I did (and still do) love the smell of orange blossom perfume, I always coveted Junior’s alligator.

But, back then, there was a distinct line between what toys were and weren’t acceptable for boys versus girls, and my grandma was especially not one to allow me to cross that line.  (I was ten years old before more than ten percent of my wardrobe was anything but dresses!)  I actually think every kid in Florida, at one time or another, has owned a little rubber alligator.  (Everyone but me, that is.)

Fast forward a few years decades.  My sister Michelle and I had recently moved into a house with a pool.  This was not my first time having a pool, but it was Michelle’s.  She had actually only lived in Florida for about five years and had only recently seen her first alligator crossing I-4!  (Actually, I’d shown her dozens of alligators, but she never knew what she was looking at if their entire body wasn’t exposed…  Nowadays, she can spot them before I do, such as the one we recently saw in our local Sam’s Club parking lot, but that’s a story for another day.)

Anyway, on this particular day, I was inside, and Michelle was mowing the yard.  I didn’t think much of anything when I heard the lawnmower stop until moments later when she ran inside flailing her arms and screaming, “Help!  There’s an alligator in the pool!”

Well, needless to say, between the two of us, if there’s anything reptilian in the house or yard, I’m usually the one to get the closest to it.  (*Right, Michelle?)  So, while she continued screaming, I was eager to go see how big it was.  She swore it was as long as her arm, so I’ll admit, I did proceed with caution.  (Adult gators are usually between 8 and 12 feet long.)  But as I approached the pool, I didn’t see it.  “It’s at the bottom,” she yelled from the cracked door.  So, you can imagine how foolish she felt when I got the skimmer and pulled up a little rubber alligator that some kid must have thrown over our fence!

(*Don’t worry.  I’m not picking on my sister.  She’s actually the one that suggested I write about this because she thinks it’s hilarious now.)

Time to talk:  Have you ever seen an alligator or crocodile in the wild?  What’s the biggest, scariest animal you’ve ever encountered?