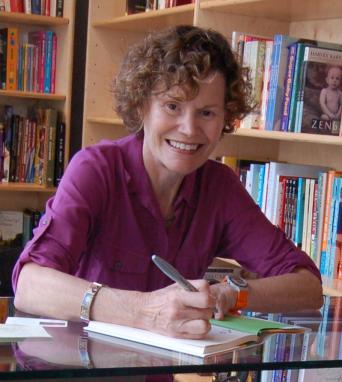 If you’re a female human over the age of twelve and you’ve never read Judy Blume’s Are You There God? It’s Me, Margaret, then you must look outside right now and see if in fact you are living under a rock.

When I was a kid, I loved the school days when we got those magazines (which were more like four page flyers) where we could select books to purchase. (Weren’t those Weekly Readers or Scholastic Magazines?)  I also loved when the public library’s bookmobile would come to school or when school would have a book fair.  Okay, the truth is, because I went to Christian school, a lot of what we got to read was censored and had to be on an “approved Christian reading list,” so I missed out on a lot of my friends’ favorites such as Are You There God? It’s Me, Margaret.  I didn’t actually get to read that until much later.  But many of Judy’s books were on our approved list, and Blubber was the first one of hers that I read.  She definitely hooked me and drew me in, and I wanted to own and read everything she wrote.  Sadly, with not all of her work being available to my school, and with my Grandma being unable to drive to take me to a bookstore, I was not able to actually read everything of hers until my own daughter went to school and discovered her.

Mrs. Blume was born on February 12, 1938, in Elizabeth, New Jersey.  She published her first book in 1969, with thirteen more books being published in the 1970s.  She’s won more than ninety literary awards, she’s sold millions of copies of her books, and she’s reached the New York Times Best Seller List numerous times over.  She was also named by the Library of Congress to its Living Legends in the Writers and Artists category for her significant contributions to America’s cultural heritage.

With all that success, it’s hard to believe that she received nothing but rejections for two years before one of her works was ever published.  Coming this June, we can expect Judy’s latest work, In the Unlikely Event, to hit the stands.

Let’s Talk:  Have you ever read a Judy Blume book?  If so, which was your favorite?  Would you ever re-read them now that you’re an adult?