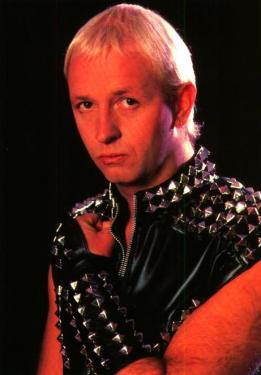 When I was a young teenager, there was this boy I loved named Leland.  Unfortunately, I don’t have any photos of him to share, but he looked a lot like a younger version of Rob Halford of Judas Priest, and he was actually the sweetest gut I ever dated.

Anyway, Leland and I never “officially” broke up.  (So, I guess technically, we’re still dating.  I hope his wife doesn’t mind.  LOL!)  But as we went our separate ways, I always held a special place in my heart for him.  When I heard he later got into drugs, I knew it was good thing we didn’t end up together, but I still had a soft spot for him and who he used to be.

This had gone on for a number of years, and I was glad because I always knew that on day three, I should do my hair and makeup extra good because I just knew that would be the day.  (You know how it is when you run into an ex…  You always want to make them regret not choosing you for their one and only.)

Anyway, one day when my son was small, I had the dream both nights, so I knew on day three, I’d see Leland.  I had to take my grandma on several errands that day, and I’d already told her we’d run into him later.  (She’d seen my dreams in action enough to know it would truly happen, so she was looking forward to seeing him as well.)  We drove all over town doing this and that all day and part of the evening, but we never saw him.

By the time I got home and made dinner for my kids, I felt disappointed.  I wasn’t sure if I was more disappointed because I didn’t see Leland that day or because it was the first time my “dream coincidence” failed me.  (And by the way, I don’t believe in coincidences.)

Later that night, my son, Jeremy, had a bad asthma attack.  I got him out of bed and rushed him to the emergency room.  His doctor came and gave him a breathing treatment and some steroids, and after a couple of hours, he sent us back home.  But as we were leaving, guess who was just arriving in the E.R.?  Yes, you guessed it…  It was Leland!  He had a cut on his forehead and needed stitches.  (Technically, I think it was after midnight, so it might’ve been considered day four, but since I’d never been to bed myself, it was still really only day three to me.)  After that, I went back to seeing him during the day of day three every time I had two dreams about him.

Tell me:  Do you listen to your dreams?  Do you think dreams mean anything or are they just psychological dumping grounds?  Do you dream in color?

21 thoughts on “Third Time’s a Charm”